Fast forward two years, and substitute Tri-Valley for Dakota State, and Boomsma is still blazing fast.  Already an All-American three times over, Boomsma now holds personal bests of 6.74 in the 60 Meters (which was fast enough to qualify him for USATF Indoor Nationals last season) and 10.44 in the 100 Meters.

But there’s more to Boomsma’s story than just numbers on a stopwatch. 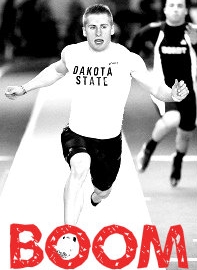 On our way back to the hotel after the finals of our events, Seth and I discussed the outcome of the day’s races.

Our feelings were mixed.  We were proud of our performances – both of us placed second in our respective events – but we still had that lingering feeling of dissatisfaction, an emotion commonplace in track and field.

As we drove, I tried to put the whole training process into perspective. It’s a crazy thing, really – even after years of consistent and meticulous preparation, you can still come up short of your ultimate goal.

At some point in the conversation, I asked Seth what he thought about the sacrifices athletes make to follow their dreams.

His response was simple, straight-forward, and absolutely true:

“It takes a lot of courage to commit to something with no guaranteed result.”

And if it’s courage that defines a great athlete, Seth Boomsma is no exception.

For those of you who don’t know, Seth has been dominating the South Dakota sprinting scene over the last couple of years.  In his first two years at Dakota State University, Seth has earned three All-American honors – a 2nd place finish in the 60 meter dash at Indoor Nationals, a 4th place finish in the 100 meter dash at Outdoor Nationals, and an unprecedented 3rd place finish at the 2013 Outdoor National Championships on a DSU 4x100 meter relay team that broke the South Dakota Collegiate State Record with a blazing time of 40.68 seconds.

The scene still gives me goose bumps: Seth, the anchor of that record-breaking relay squad, exploded down the homestretch with the grace and power only a handful of human beings on the planet possess.  I don’t know exactly what his split was, but considering it would take an average of 10.17 seconds per 100 meters to run 40.68….well, I’ll let you contemplate that one.

But this type of performance is something I’ve come to expect from Seth, who is having another banner season, currently ranking 2nd in the 60 Meters and recently finishing 2nd at the Iowa State Classic behind Florida’s Hugh Graham Jr.

He has this uncanny ability to execute on race day - and that doesn’t just happen by chance.

“The big thing is that I will never let anyone outwork me inside or outside the workout”, explains Seth.

“With that said, I tend to take things to the extreme level in that recovery means everything to me. Having my sleep schedule down to the exact minute, eating healthy on a strict time schedule, getting massage and contrast shower on certain days. The list could go on and on.”

And his dedication doesn’t stop there. The Dakota State sprinter attends to even the most intricate details of race preparation.

“As a sprinter, you want to be as efficient as possible. Things like hitting triple extension on the start, having proper arm drive, activating your glutes on the start, stepping over the opposite knee at top speed, and doing all this while being relaxed is a tough thing to do. Studying other athletes technique with a similar stature as myself plays a big role. There are so many miniscule things you can do to improve technique just to cut off a few hundredths [of a second].”

Nonetheless, there are no guarantees in track and field.

A false start, a pulled hamstring, a tenth of a second slow off the gun, a mistimed lean, or any other unfortunate race day circumstance could easily mean the difference between a gold-medal and an "also ran". All of the preparation in the world could never eliminate the risk of failing to live up to personal and external expecations - and for most, that's a tough pill to swallow.

It brings me back to Seth's comment as we drove back to the hotel after my last indoor track meet.  Facing the risk of failure head-on requires a lot of courage, and there's very few athletes I've known with more courage than Seth Boomsma.  Despite the uncertainty involved in chasing his dreams on the track, you can bet that he'll continue to abide by a strict and calculated training routine, doing all of the little things his competitors overlook, even if it means shaving off only a hundredth of a second.

Because in the end, that hundredth of a second could make all the difference.

In a few weeks, we’ll follow Seth at the 2014 NAIA Indoor Championships at The Spire Institute in Geneva, Ohio and all of the other South Dakota athletes at their respective national championships.